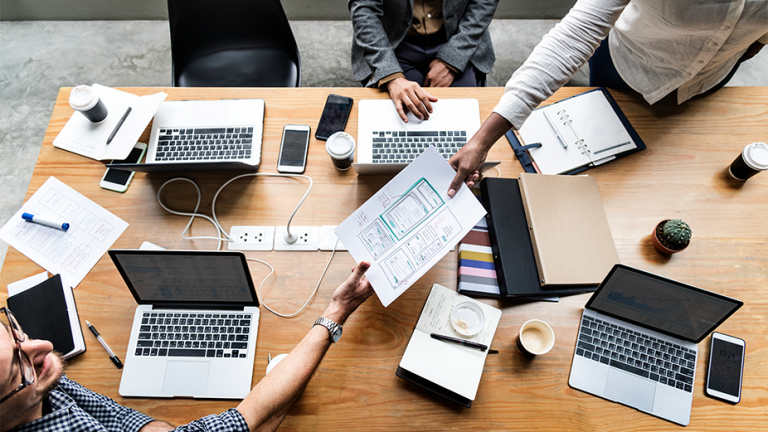 Talking about one of the fastest and speedily growing industries, mobile app development is the one that observes the latest platforms and new applications launched every other day.


There are different device platforms in the gargantuan world of mobile app development that you need to design for, typically Google Play Store and Apple App Store. Usually, apps for either of the systems have to be developed individually since both the operating systems have their own specific code language.


But wouldn’t it be amazing if you could code the app in a single universal language that can work across both platforms?


This article will help you learn more about cross-platform mobile app development and how it can have a profound impact on businesses.

What Do You Understand By Cross-Platform Applications?

As we know there are various platforms for smartphones such as Android, iOS, Windows, etc. and all such platforms have their own unique coding.  Usually, for a native mobile app, there’s a separate app developed for Android and iOS/Apple, and each such development is done using a particular platform programming language.


For example, the standard languages recognized by the following mobile device platforms are:

In short, the Android apps are not available to Apple users and vice versa. However, for mobile apps to run on any of these platforms, they are required to match the coding of the platforms. And, if the match doesn’t exist, the app will only run on the platform that it is particularly suited for and not on the others.


By definition, a cross-platform app refers to an app that is suitable to run on more than one mobile device platform. Developers can use one single code path to build applications that can run on different platforms.


Businesses are trying hard to gain a competitive edge by developing mobile apps that they can launch in both the Google Play Store and the Apple Play Store.

One of the main strengths of this particular style of development is that the whole code can be used repeatedly. Instead of creating new codes for each and every platform, a single code can simply be reused. As a result, it saves so much time, effort, and money as there is no necessity of repetition in the task of writing codes

Basically, the whole cross-platform application architecture is essentially based on the ‘writing once and running everywhere’ idea.  Reusable codes in addition to agile app building, can therefore easily bring down the overall expense of the app development process. To strengthen the business on various platforms as well as tools in a budget-friendly manner, there is certainly no substitute for cross-platform applications.

It is very apparent that applications built through the unified code have absolute uniformity in their design as well as functionality across various platforms and operating systems. Also, in terms of enterprise mobility solutions, it is very essential to get the same look and feel on both iOS and Android systems. The customers or the app users prefer to have the same experience on any particular device through cross-platform mobile apps.

As a result of ever-increasing market competition as well as ever-evolving business requirements, it is essential to update the business app on a regular basis. The modification of native applications is a time-extensive task and very complicated given the complexity of the code as well as rigorous testing processes and procedures.

Conversely, a cross-platform application is duly built by using a single code that makes it easier and faster to update. The cross-platform business app can be easily modified or even tailored to deal with the challenges.

If you’d like to introduce mobility at the workplace as well as to incorporate the ‘BYOD- Bring Your Own Device’ idea, then the business app comes in handy. Native applications have quite a few drawbacks on both devices and platforms. For example, the Android app needs an Android device at the workplace and if most workers use iPhones, you will not be able to introduce mobility with a personalized Android business app.

This is no surprise in this but an important reason why so many developers are targeting the cross-platform functionality of the mobile apps they are creating. Well, it’s nothing much but plain maths. Instead of allowing the app available for just one platform, you’re building it for the ‘n’ number of platforms which means that the number of users of your app would also grow in number by maintaining ‘n’ as the ratio.

The emergence of cross-platform app development is obviously a trend that will shape the fate of app development. Most of the applications that were once limited to running on only one platform have now all been extended to other platforms as well. It has also become a major benefit for video game apps, as they’ve earned a user base like never before.

Because there is only one application that has been built that runs across all platforms, it is much easier to handle and even deploy code or to make changes easily. Further, updates can be synchronized easily and quickly across all platforms as well as devices, saving both time and money. Even, if a bug is found in the common codebase, it can be patched easily at once. This helps developers to work more efficiently.

Therefore, in order to thrive in this modern fast-paced environment, it is absolutely necessary to create cross-platform apps in order to achieve better ROI and engage the target audience.

In essence, every company needs to create a glitch-free and stable app that runs on various mobile platforms in order to engage with a much wider audience and, in this aspect, cross-platform mobile applications tend to be the perfect and optimal solution.

Take a look through the descriptions and brief overviews of the popular cross-platform app development frameworks to have an understanding of what these frameworks are capable of doing. When choosing the right framework for mobile applications, you will need to focus on your expectations, your preferences, your budget, and your timeline.

React Native is among the most popular cross-platform frameworks introduced by Facebook. Supported by gigantic community support, React Native is developed on top of the ReactJS, which gave huge competitiveness to the long-time champion, AngularJS.


Some of the mobile apps that are developed using React Native are Facebook, Walmart, Airbnb, Instagram,  Bloomberg, Ubereats, Soundcloud, etc.

A Google product, Flutter is an open-source mobile cross-platform app development framework. Built with an object-oriented language, it is used for the creation of apps for platforms such as Android, iOS, Mac, Windows, Linux, Google Fuchsia, and the web by using a single code base. Flutter is ideal for developing an MVP, especially if you are a startup, and also works best for interactive apps that run on desktop or web pages. Some popular apps developed using the Flutter app development framework are Alibaba, Google Ads app, Cryptograph, Birch Finance, Reflectly, etc.

Based on Dart, a relatively new programming language that has many common features with Swift and Kotlin and can also be transformed into JavaScript code.
Faster App Development with Hot Reloading
excellent multiple IDE support
pixel rendering features

Xamarin is among the best hybrid app frameworks supported by C# programming language. Xamarin, an open-source framework, is used to create hybrid mobile applications using.NET and C#. When it comes to the perfect and cost-effective cross-platform app development frameworks, Xamarin helps reduce costs by using a single-code to develop applications for three mobile device platforms; iOS, Android, and Windows.


In addition, as a Microsoft product, this comprehensive multi-platform development system has over 60,000 developers and contributors, outstanding customer service and detailed documentation. Some applications that are made using Xamarin are The World Bank, BBC Good Food, HCL, Alaska Airlines, etc.

Ionic is regarded to be one of the best mobile cross-platform app development frameworks and an open-source framework for developing mobile apps with the help of web technologies such as HTML, CSS, and JavaScript. Ionic uses Cordova and Ionic Native to deliver  mobile-optimized elements and native APIs. Written in the TypeScript language, Ionic’s main benefit is its templates.

Beautiful Default UI that can be easily customized
Cordova plugins offering access to exciting features like Flashlight, camera, GPS, and more.
Most incredible sense of community that any developer has used in the past.

PhoneGap was first branded as “Apache Cordova,” launched by Nitobi. Afterwards, Adobe acquired Nitobi and renamed it “PhoneGap.” It is a widely used technology for the creation of cross-platform mobile apps. Or, we can claim that it is among the very comprehensive cross-platform app development frameworks for creating robust cross-platform mobile applications. The favorite aspect of this architecture is that it eliminates the use of complex languages, like Java for Android and Swift for iOS.


You don’t need advanced knowledge of programming languages to work with PhoneGap. All you need is proficiency with simple languages such as HTML, JavaScript, and CSS. PhoneGap developers are aiming to reduce the gap between hybrid and native applications, providing a cross-platform environment with no abrupt complexity. Some of the apps that are developed using PhoneGap are Wikipedia, HealthTap, The DHS Program, TripCase, etc.

As stated earlier, there are a range of current tools and technologies that developers can employ to build apps quickly and reliably. The best mobile app development frameworks offer a variety of programming languages, features, and platforms. It is your choice which system is ideally suited to your needs, budget, technical specifications, and stronger chances of succeeding in the short term as well as the long run.

You need to keep two important aspects in mind when building a mobile app.  One is the app speed, and the other is the user experience delivered by the app.  You must ensure that you check the loading speed of your mobile application as well as the functionality of the application. Certainly, cross-platform app development frameworks can help you create apps that you can expect to replicate the performance levels of native apps but entirely depends on how competent your developer is.

At DOT Technologies, our developers know ins and outs of various styles of app development. Equipped with a vast knowledge of mobile application, years of professional experience and impeccable track record, you can expect a robust and effective app from us. For any framework you select, we have an expert developer at your disposal.

Don’t forget to discuss the complexity of your concept and the design you plan. This way , it will enable us to better comprehend all your questions and give you the most valuable suggestions.

Begin typing your search term above and press enter to search. Press ESC to cancel.